ExploraVision is a Real-World Experience

When I first introduced the ExploraVision science competition to my students at Minot Public Schools, I compared the program to the work done by NASA scientists and engineers. These professionals work 30 to 40 years into the future, adjusting their ideas as technology improves. Many will never live to see these projects come to fruition, but they still never fail to bring a shared sense of excitement and ownership to their work. ExploraVision functions in a similar way, asking students to embark on a project-based learning adventure to envision what technology will look like in the future.

I have implemented ExploraVision in my classroom on and off for the past 16 years. This year, however, was very different. I counseled students from 13 different elementary schools who are part of an advanced program called PACE (Program for Academic Challenge in Education). I was hesitant to jump into ExploraVision with student groups that would be fragmented across different schools, but their enthusiasm to jump in and start the process won me over.

Brainstorming
As a group, my students began generating ideas of current problems they felt needed to be addressed. We kept all these ideas posted on the wall and continued adding to them for several classroom sessions. Students then chose the top two ideas most interesting to them, and from there groups were formed. 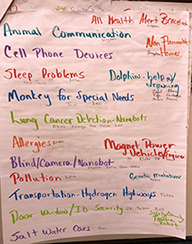 Ideas we jotted down during the brainstorming process.
I have learned to never discount any idea as having potential to become a great project. If it is important to the students, it will become more feasible as they take full ownership of the idea.

Staying Organized
The PACE program only meets once a week, so it was important to get as much done as possible in each session. I provided students with a timeline, and each week I created a to-do list to help them stay on track. Each group had a project folder in Google Classroom to keep track of all the information they collected, which was helpful for sharing research, ideas, and eventually, for storing the final paper and website slides. Like any other project, student productivity waned at times, and some group dynamics did not gel as well as others. Our sessions were usually spent helping groups iron out any kinks so they could continue to move forward. 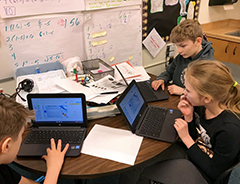 Fostering Teamwork
One activity that I’ve found helps students solidify as a group is designing a project/product name and logo. This creates ownership and collegiality. It also brings in creative marketing, promoting the concept of selling their futuristic idea to a potential funding source or business.

A project team hard at work designing their logo.

Final Thoughts
ExploraVision is project-based learning that takes students out the world of immediate gratification, of finding that one right answer and focusing on top grades, and forces them to think creatively with their hearts as well as their minds. ExploraVision is not just a project, it is an experience.

About the Author
Julie Jaeger is Gifted and Talented educator from Minot, ND who runs a once-a-week program called Program for Academic Challenge in Education (PACE) for students from third to fifth grade. Over the past 40 years, she was worked with students as a technology integrator, a classroom teacher, and now as a gifted educator.